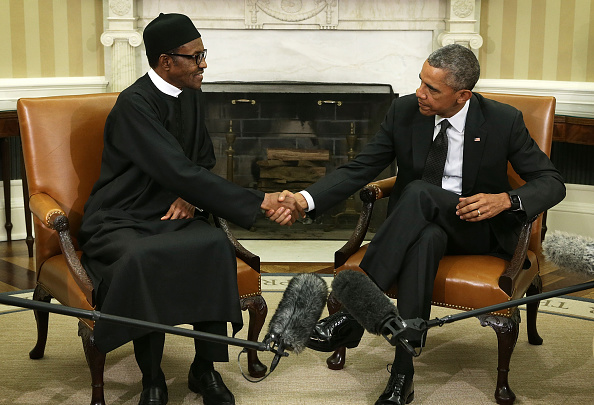 US President Barack Obama (R) shakes hands with Nigerian President Muhammadu Buhari (L) during a meeting in the Oval Office of the White House on July 20, 2015 in Washington, DC.Getty Images
http://www.ibtimes.co.uk/us-president-obama-gives-nigerian-president-muhammadu-buhari-names-oil-thieves-1513241

The confidential information was passed over by the US administration after Buhari's request to help eradicate corruption believed to have been infiltrated since the administration of former Nigerian President Goodluck Jonathan.

Several sources confirmed the information pass over, including a member of the Nigerian president's entourage who accompanied Buhari at the White House recently.

"I can tell you that the president already has the list of names of the people engaging in the stealing of Nigeria's oil. The list, when released by the president, will shock Nigerians," said a source speaking on the condition of anonymity, reported Punch.

"The president will probe all of them and make sure they return whatever fortune they made from their thievery."

President Buhari hopes to bring back the estimated $150bn (£96bn) that was stolen through looting the country's oil.

He has alleged that nearly 250,000 barrels of oil were stolen on a daily basis by ministers from Jonathan's administration.

"The amount involved is mind-boggling. A lot of damage has been done to the integrity of Nigeria with individuals and institutions already compromised," said Buhari who was sworn into presidency in May 2015, reported IBTimes.
Posted by Crude Oil Daily at 12:00 PM