Crude oil’s long price slide might be ending, feel some experts. Last Friday, the price of Brent crude, seen as a benchmark for what India uses, saw a low of $75.3 a barrel — it is now trading around $79. The fall has been nearly a third from its high seen in June, only five months earlier.

However, feels T Gnanasekar, Director, CommTrendz: “The technical picture suggests Brent crude has found a bottom. Though Friday’s rebound was mostly a short-covering and profit-booking one, there are chances that prices might have bottomed out for the time being.”

Still, to sustain above technical levels, a commodity requires some demand or a fundamental support. Gnanasekar believes, “Winter demand will set in soon and that might support prices.” 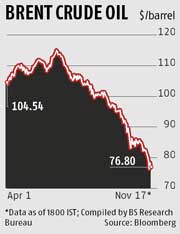 Another factor could be a cut in production by the Organization of the Petroleum Exporting Countries (Opec), which a meeting on November 27. Earlier, Opec used to say $100 was the safe price below which it would not intervene. The price is well below this, partly because its stronger members were talking down the prospect of a cut in output quotas.

However, Natixis Commodities says: “What is rapidly becoming evident is the extent of the potential damage that lower oil prices might wreak upon weaker Opec members.” For instance, Nigeria’s 2014 budget is predicted upon output of 2.39 million barrels a day at a price of $77.50/bbl. Its output is running below the target and now if the price also remains lower, its budget calculations will unravel. Venezuela is repaying its international debt, especially to China, also in the form of crude oil. A lower price affects its debt repayment. And, half of Ecuador’s exports are of crude oil; a fall in its prices beyond a point would substantially hurt its economy.

Also, at some point, a lower price will affect new projects. So far, no report has come of the dropping new and big exploration. BP and Total, major entities in this field, have both indicated they will proceed with existing projects even at $80/bbl. BP’s chief executive, Bob Dudley, was quoted last week as saying lower prices would impose more discipline on the oil industry.

The International Energy Agency feels a price of $80/bbl would result in a 10 per cent fall in US oil investment in 2015.

Opec secretary-general Abdalla Salem el-Badri is trying to find a balance. He has said, “Opec is looking for a reasonable price, at which producers and consumers can live together.
Posted by Crude Oil Daily at 11:18 AM