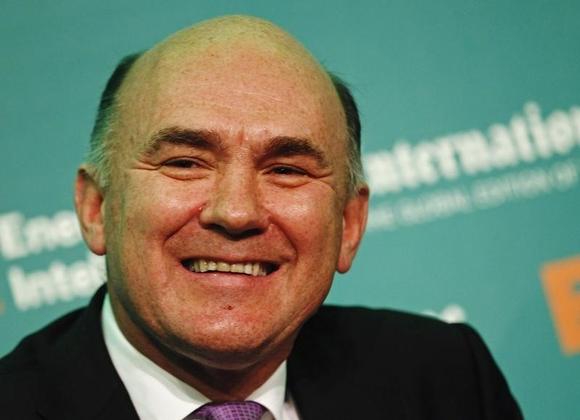 President and CEO of Vitol Group Ian Taylor participates in a question and answer session during the Oil & Money conference in London October 1, 2013.

(Reuters) - Forget conspiracy theories and be prepared for OPEC to cut output in November because this is what they need to do and have done in the past, veteran oil traders who run and co-own some of the world's biggest trading firms told the Reuters Commodities Summit.

The views from the top executives of Vitol, Gunvor and Mercuria go against expectations that the 12-member Organization of the Petroleum Exporting Countries is unlikely to step in and support prices.

Oil prices have fallen sharply from $115 a barrel in June to a four-year low near $82 on Tuesday on weakening demand, ample supply and the perception that OPEC heavyweight Saudi Arabia is happy to keep prices at levels of $70-$80 per barrel.

OPEC members Kuwait and Iran have also said a cut in production at the Nov. 27 OPEC meeting was unlikely. Saudi Arabia has yet to comment publicly.

"My feeling is we're underestimating now the possibility of OPEC cutting," Vitol's [VITOLV.UL] chief Ian Taylor said. "Everybody says they are not going to cut, and I'm not 100 percent sure. I think there will be serious discussions at the OPEC meeting about cutting."

Taylor, who at last year's Reuters Summit saw a chance of a steep fall in oil prices, said the major decline may have already occurred. "I'm not convinced we've got another big leg down," he said.

So far, the only specific call for a cut has come from Libya's OPEC governor - with the proviso that Libya itself is exempt. Venezuela said it and fellow member Ecuador are working on a joint proposal to support prices.

"I think they will defend, short-term, the market from going lower," he said.

"I think the Saudis will not have a problem to maybe cut 400,000-500,000 barrels and maybe you'll see some symbolic cuts from the other Gulf states. Kuwait and the Emirates will maybe add something to half a million or so."

Tornqvist doubted any OPEC action would drive prices back to $100 a barrel, a level many members including the Saudis had endorsed. "I would say we'll see $80 to $90 in the medium term, next year," he said.

The head of Mercuria, the world's fourth largest oil trader, said OPEC needed to remove 1.5 million barrels per day - assuming no lifting of sanctions on Iran - and there was a 50:50 chance of a cut.

"I am probably slightly more optimistic about the possibility of a cut, but I still don't see that as a more than 50 percent chance," Mercuria CEO Marco Dunand said.

The meeting in Vienna is set to be one of OPEC's most important in years. Any cut in output would be OPEC's first since the 2008 financial crisis.

Before then, a deadline to complete an agreement on Iran's nuclear program falls on Nov. 24. Any deal, and lifting of the Western sanctions on Iran that have forced Tehran to cut exports, could add to OPEC's challenge.

"That itself can have an impact on how much production needs to be cut by OPEC," said Dunand.

A cut is by no means certain and a fourth senior figure addressing the summit, Trafigura's Chief Financial Officer Pierre Lorinet, pointed out an argument against doing so.

"I can see OPEC and Saudi Arabia playing the long game. A low price for a period of time may actually play into the hands of people with a lot of reserves in the ground at cheap cost," he said.

Saudi Oil Minister Ali al-Naimi has made no public comment on the oil market since September and a number of theories have emerged about the kingdom's possible strategy.

Those have ranged from Riyadh looking to curtail the steep growth in U.S. shale oil, which is eroding OPEC's market share, to the kingdom's desire to punish Iran and Russia, which heavily depend on oil revenues, over Syria.

Asked whether he saw a change of tack in OPEC to keeping market share from defending prices, Vitol's Taylor said he thought Saudi Arabia wanted to make sure its fellow OPEC members take part in any reduction.

"Yes and no. I'm sure the Saudis will wish to ensure that if there's going to be a cut, everybody participates, it's not just them. And that's where the difficult conversations start to happen."

"But at the end of the day, for a lot these countries, a price at this level or lower gets a bit serious."

Saudi Arabia's reluctance to cut output has parallels with previous falls in oil prices. When crude crashed during the Asian financial crisis of 1998-1999 and then after the 9/11 attacks of 2001 Riyadh took its time to recruit other producers, including non-OPEC suppliers, to the cause, although on both occasions OPEC shouldered the lion's share of output reductions.

The 2008 financial crisis price crash happened so quickly - within weeks of prices hitting a record high of $147 a barrel - that OPEC was forced to act quickly without non-OPEC help.

Taylor and Dunand both gave short shrift to suggestions that Saudi Arabia wanted lower prices to make shale oil uneconomic, or to weaken Iran or Russia.

"I don't actually buy too much of the conspiracy theories. I think it is more for them (the Saudis), the issue of having other countries sharing the burden of cutting production than anything else," the Mercuria boss said.

Taylor's view was similar: "It's market share that is important to them, and if everybody is willing to cut I suspect they might as well."