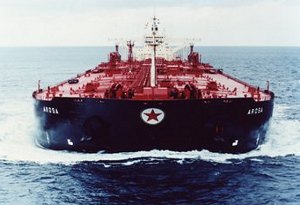 http://www.platts.com/latest-news/shipping/london/north-sea-cfd-structure-steepens-on-vlcc-report-26749043
The North Sea Contracts for Difference market, used to hedge the spread between physical Dated Brent and Cash BFOE forward contracts, rose to its steepest prompt backwardated level in a month Friday, on the back of an increasingly strong Forties market due to a reported VLCC export fixture and support from rival crude grade Urals.

"I don't have confirmation, but I think it's going East," said one trader Monday, regarding reports of a March-loading VLCC taking Forties crude east to South Korea. "In terms of window activity, all the signs are there."
Recent strength seen in the prices of Russian sour crude Urals has also supported its sometime competitor Forties, traders said, after some refiners with the necessary flexibility reportedly sold out previously bought Urals into the rising market, to replace it with Forties.

"The cost of Urals has certainly continued to support it, Urals is appreciating in value," said the trader Monday. "Saying that, Forties still looks competitive versus Urals as a sour."