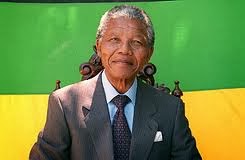 http://news.yahoo.com/nelson-mandela-dies-214057711.html
Former South African President Nelson Mandela has died at age 95 of complications from a recurring lung infection.
The anti-apartheid leader and Nobel Peace Prize laureate was a beloved figure around the world, a symbol of reconciliation from a country with a brutal history of racism.
Mandela was released from prison in 1990 after nearly 30 years for plotting to overthrow South Africa's apartheid government. In 1994, in a historic election, he became the nation's first black leader. Mandela stepped down in 1999 after a single term and retired from political and public life.
History
Born Nelson Rolihlahla Mandela in Transkei, South Africa on July 18, 1918, he was one of the world's most revered statesmen and revolutionaries who led the struggle against apartheid in South Africa.

A qualified lawyer from the University College of Fort Hare and the University of Witwatersrand, Mandela served as the President of South Africa from 1994 to 1999.
His political career started in 1944 when he joined the African National Congress (ANC) and participated in the resistance against the then government¹s apartheid policy in 1948. In June 1961, the ANC executive approved his idea of using violent tactics and encouraged members who wished to involve themselves in Mandela's campaign. Shortly after, he founded Umkhonto we Sizwe, the armed wing of the ANC and was named its leader.
In 1962, he was arrested and convicted of sabotage and other charges, and sentenced to five years of rigorous imprisonment. In 1963, Mandela was brought to stand trial along with many fellow members of Umkhonto we Sizwe for conspiring against the government and plotting to overthrow it by the use of violence.
Jailed for life
On June 12, 1964, eight of the accused, including Mandela, were sentenced to life imprisonment.
His statement from the dock at the opening of the defense trial became extremely popular. He closed his statement with: "During my lifetime I have dedicated myself to the struggle of the African people. I have fought against white domination, and I have fought against black domination. I have cherished the ideal of a democratic and free society in which all persons live together in harmony and with equal opportunities. It is an ideal which I hope to live for and to achieve. But if needs be, it is an ideal for which I am prepared to die."
Mandela served 27 years in prison from 1964 to 1982, spending many of those years at Robben Island Prison, off Cape Town. While in jail, his reputation grew and he became widely known across the world as the most significant black leader in South Africa.
He became a prominent symbol of resistance as the anti-apartheid movement gained momentum in South Africa and across the world. On the island, he and other prisoners were subjected to hard labor in a lime quarry. Racial discrimination was rampant and prisoners were segregated by race with the black prisoners receiving the fewest rations. Mandela has written about how he was allowed one visitor and one letter every six months.
Free and fair
In February 1985 President PW Botha offered Mandela his freedom on condition that he unconditionally rejected violence as a political weapon but he rejected the proposal. He made his sentiment known through a letter he released via his daughter.
"What freedom am I being offered while the organization of the people remains banned? Only free men can negotiate. A prisoner cannot enter into contracts," he wrote. In 1988 Mandela was moved to Victor Verster Prison and would remain there until his release.
Throughout his imprisonment, pressure mounted on the South African government to release him. The slogan 'Free Nelson Mandela' became the new battle-cry of the anti-apartheid campaigners. Finally, Mandela was released on February 11, 1990 in an event streamed live across the world. After his release, Mandela returned to his life's work, striving to attain the goals he and others had set out almost four decades earlier. In 1991, the first national conference of the ANC was held inside South Africa after the organisation had been banned in 1960.
President Mandela
Mandela was elected President of the ANC while his friend Oliver Tambo became the organisation's National Chairperson. Mandela's leadership and his work, as well as his relationship with the then President FW de Klerk, were recognised when they were jointly awarded the Nobel Peace Prize in 1993. South Africa's first multi-racial elections, held on 27 April 1994, saw the ANC storm in with a majority of 62 per cent of the votes and Mandela was inaugurated in May 1994 as the country's first black President.
As president from May 1994 until June 1999, Mandela presided over the transition from minority rule and apartheid, winning international respect for his advocacy of national and international reconciliation.

Honors and personal life
Mandela has received many national international honors, including the Nobel Peace Prize in 1993, the Order of Merit from Queen Elizabeth II and the Presidential Medal of Freedom from George W. Bush.
In July 2004, the city of Johannesburg bestowed its highest honour by granting Mandela the freedom of the city at a ceremony in Orlando, Soweto.
In 1990, he received the Bharat Ratna Award from the government of India and also received the last ever Lenin Peace Prize from the Soviet Union.
In 1992, he was awarded the Atatürk Peace Award by Turkey. He refused the award citing human rights violations committed by Turkey at the time, but later accepted the award in 1999. Also in 1992, he received of Nishan-e-Pakistan, the highest civil service award of Pakistan. Mandela's autobiography, "Long Walk to Freedom," was published in 1994. He had begun work on it secretly while in prison.
Mandela and his wives
Nelson Mandela's love life has seemingly run parallel to his political one — and can be divided up into three key eras. The young activist married his first wife, Evelyn Mase, in 1944. The couple, who had four children, divorced in 1958 — shortly before Mandela became an outlaw with the banning of the ANC.
Mandela's second marriage — and probably his most famous — largely coincided with the time he spent locked up at the hands of the apartheid regime. In 1958 he walked down the aisle with Winnie Madikizela, who stood by his side and actively campaigned to free him from prison. Winnie became a powerful figure in her own right while Mandela was imprisoned but a series of scandals involving her led to the couple's estrangement in 1992, her dismissal from his cabinet in 1995, and their official divorce in 1996. The couple had two children. Winnie was also later convicted of kidnapping.
His third marriage, to Graca Machel — the widow of former Mozambique President — came on his 80th birthday as entered his role of world statesman.
Yahoo! Australia contributed to this report.
Posted by Crude Oil Daily at 5:12 PM