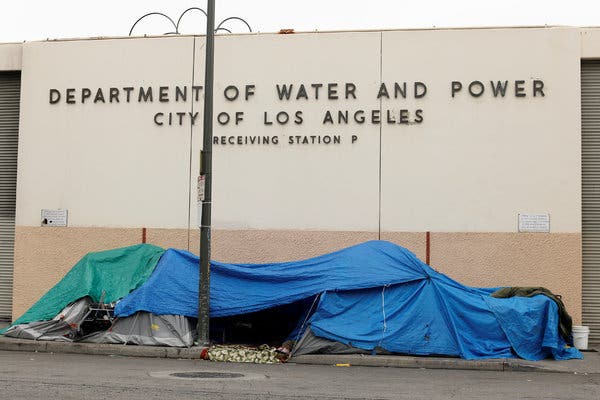 Tents and tarps along the sidewalks of Los Angeles, where homelessness has soared in recent years.CreditCreditMike Blake/Reuters

By Maggie Haberman and Jose A. Del Real

WASHINGTON — President Trump is pushing aides to find ways to curtail the growing number of homeless people living on the streets of Los Angeles, part of broader discussions his aides have held for weeks about urban problems in liberal locales, according to his personal lawyer and administration officials.

A team of administration officials is in California on what was described as a “fact-finding” mission as they weigh proposals to address the burgeoning crisis. But it is not clear what steps the administration could legally take on an issue that has traditionally been handled at the local level.

“Like many Americans, the president has taken notice of the homelessness crisis, particularly in cities and states where the liberal policies of overregulation, excessive taxation and poor public service delivery are combining to dramatically increase poverty and public health risks,” said Judd Deere, a White House spokesman. He said that the president signed an executive order to ease affordable housing development in June, and that he had “directed his team to go further and develop a range of policy options for consideration to deal with this tragedy.”

The visit of the administration officials to California was first reported by The Washington Post. The intensified discussions took place as the president, who has frequently criticized how urban areas in Democratic states are managed, prepares for a swing through California next week.

California has the largest homeless population in the country, according to a 2018 report compiled by the Department of Housing and Urban Development, at an estimated 130,000 people.

And the nature of homelessness in California is markedly different than in other parts of the country; the state also has the highest percentage of homeless who are unsheltered, with nearly 70 percent of the homeless — or about 90,000 people — living on the street. That report estimated that nearly half of all people without shelter in the United States were in California in 2018. New York State had the second largest homeless population, nearly 92,000, according to the report. But of those, fewer than 5 percent lacked shelter.

Rudolph W. Giuliani, the president’s personal lawyer and former mayor of New York, who was known for his aggressive crackdowns on street-bound homelessness, said he had been discussing the issue with administration officials.

“I think they feel that there’s got to be something that creates an incentive, carrot and stick, for cities to do something about it,” Mr. Giuliani said, adding that the discussions had been going on for two months
Word of the efforts by the administration, which has repeatedly sought to cut housing assistance in its budget requests, alarmed advocates for the homeless and angered city leaders across California.

“Simply cracking down on homelessness without providing the housing that people need is not a real solution and will likely only make the situation worse,” said Mayor London Breed of San Francisco, whose city has been an object of the president’s scorn.

An estimated 59,000 homeless people live in Los Angeles County, according to a count conducted this year by the county, about a 12 percent increase over 2018. Of those, an estimated 44,000, or 75 percent, were unsheltered. Within the city of Los Angeles, which is distinct from the county, there were 36,000 homeless, including 27,000 who were unsheltered, according to that same count.

Los Angeles’s mayor, Eric M. Garcetti, and other political leaders faced intense scrutiny this summer after the release of the results of the 2019 count, which also showed that the number of homeless had increased 16 percent in the city. The surge was especially shocking because the government spent hundreds of millions of dollars in 2018 to address the problem.

Voters approved two high-profile initiatives in recent years to fund homeless services in the region, including a 2016 city bond that earmarked $1.2 billion to build housing for the homeless and a 2017 county quarter-cent sales tax increase to raise about $355 million annually for 10 years. The mayor’s defenders and city officials have pointed out that the city housed nearly 22,000 people in 2018, a record number for the government and an increase of 23 percent from 2017. But even amid those efforts, the high cost of housing in Los Angeles, one of the priciest rental markets in the country, has continued to push more individuals and families out of their homes.

While Skid Row in downtown Los Angeles has often been a focal point for national conversations about homelessness, the high rate of unsheltered people has become a source of friction across the state, in cities including Eureka, Oakland and San Francisco. With nowhere else to go, the homeless often set up encampments on sidewalks and beneath highway overpasses. Increasingly, encampments are nestling against wild lands, raising concerns amid increasingly intense and volatile wildfire seasons.

But while the displeasure of middle-class urban residents often receives attention, the homeless themselves — many of whom have full-time jobs but cannot afford California’s high rents — have the most to be frustrated about. Safety is a huge concern: An analysis published earlier this year by Kaiser Health News found that a record 918 homeless people died last year in Los Angeles County.

The administration has discussed refurbishing homeless facilities or building new ones, The Post reported. An administration official said that while those ideas have been discussed, nothing has been settled.
Posted by Crude Oil Daily at 1:03 AM