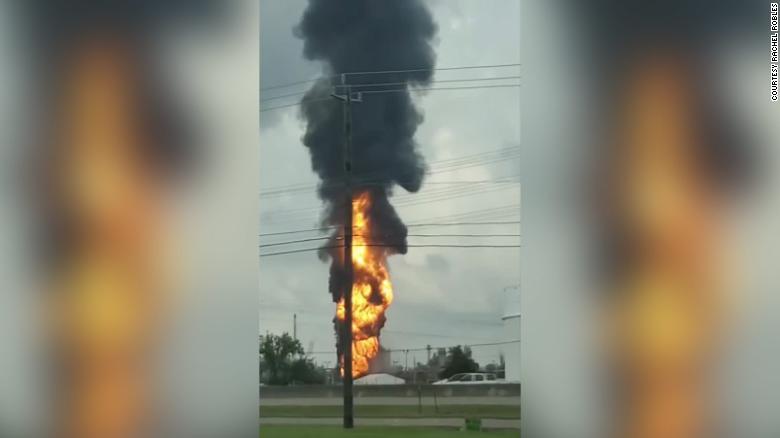 
Emergency workers have contained a fire that erupted earlier in the day with an explosion at a Texas ExxonMobil plant, authorities said.

The Harris Country Office of Homeland Security and Emergency Management said the fire had been contained and until it's extinguished, the air quality in the area would continue to be monitored for contamination.

"Our first priority is people in the community and in our facilities," ExxonMobil Baytown Area said in a statement.

The fire began with an explosion at around 11 a.m. Wednesday at the unit of the Baytown plant that contains light hydrocarbons including propane and propylene, officials said.

As smoke plumed from the plant some 26 miles from Houston, the City of Baytown issued an emergency alert to residents informing them that a precautionary shelter had been established for residents west of the plant.

The Texas Commission on Environmental Quality dispatched emergency staff to the site within minutes to perform handheld air monitoring along with ExxonMobil, it said.

"Harris County wishes all people affected a quick recovery and thanks to all first responders involved," the county said.

The cause of the explosion and subsequent fire was being investigated by the Harris County Fire Marshal's Office.

ExxonMobil said it was cooperating with all government agencies in the investigation.

"We deeply regret any disruption or inconvenience that this incident may have caused the community," ExxonMobil said.

However, ExxonMobil in Bayton has a history of safety and environmental violations, according to OSHA records, KHOU 11 reported.

In the past decade, ExxonMobil in Baytown has been fined $40,000 for eight safety violations. In the past three years, five workers were injured, including one person who lost a finger.

In 2010, it was ordered to pay almost $20 million in fines for Clean Air Act violations
Posted by Crude Oil Daily at 1:37 PM