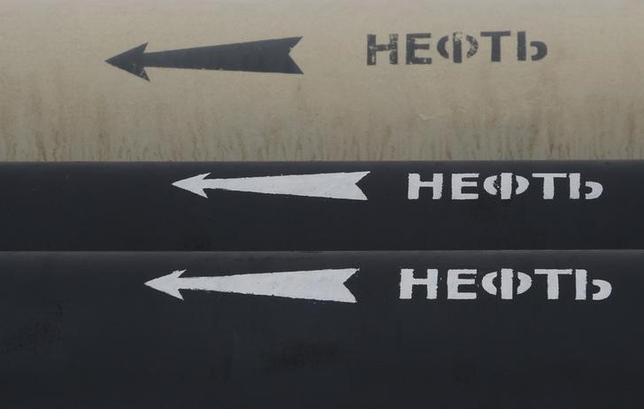 Pipes are pictured at an oil gathering facility owned by Bashneft company near the village of Shushnur, northwest from Ufa, Bashkortostan, January 28, 2015. The signs read: ''Oil''.
Reuters/Sergei Karpukhin
http://in.reuters.com/article/us-russia-economy-oil-idINKCN0UO0KB20160110

A plunge in the oil price to 12-year lows during Russia's New Year and Orthodox Christmas break means the country returns to work on Monday with its economic recovery and once-mighty savings war chest on the line.

The equity and currency turmoil in China that rippled through world markets during Russians' 10-day festive holiday pushed Brent crude futures to around $32 a barrel, down from $45 at the start of December and a step closer to the $20 price trough predicted by Goldman Sachs.

Crude's collapse from $100 a barrel since mid-2014 has already pummeled Russia, which relies on energy for about half its budget revenues and 40 percent of its exports. The latest slide compounds the problems facing President Vladimir Putin ahead of elections in 2018.

Due to thin local holiday trading, the rouble fell only 2 percent last week, but the 75-per-dollar rate is not far now from the 80.1 record low hit 13 months ago.

Back then, Russia defended the currency by raising interest rates by 500 basis points overnight; a sharp rouble move lower in coming weeks could force a repeat of that action.

Inflation would surge, and the recession that the government had forecast ending this year would be extended.

In the worst-case scenario with oil staying at or below $30 per barrel, Russia's coffers would empty in just over a year, leaving little to show for a decade of bumper oil earnings.

For Putin, the $100 billion-plus Russia still has in two rainy-day funds, is "the ultimate insurance policy to navigate the election," says Christopher Granville, managing director of Trusted Sources, an investment consultancy.

Granville notes this year's planned budget deficit of 3 percent of annual economic output hinges on $50-a-barrel oil, a gap the government had hoped to fill by borrowing and dipping into the national reserve fund.

But oil at $30 would blow the hole out to 5 percent or more, Granville says. If that happens, Putin may have to risk irking voters with tax hikes and savage spending cuts that throw the economy deeper into recession.

Or he must dig even deeper into rapidly-dwindling savings.

Borrowing on international bond markets or privatizations are also possible but neither is attractive in view of depressed share prices and high borrowing costs.

Investors' appetite for Russia is further dampened by continuing Western sanctions imposed to punish Moscow's actions in Ukraine, although the sanctions do not directly prevent Russia from borrowing.

The two sovereign funds are already being depleted. In early December, they contained $130 billion, down from mid-2014 peaks around $180 billion. The government also has to find a trillion roubles, some 1.2 percent of GDP, that has been promised to bail out state development VEB.

"The national savings buffers are worth around 6.5 percent of GDP at present and that's the basis of saying they will run out of cash by the middle of next year - unless the oil price goes up," said Granville, who had adjusted the paper value of the funds to reflect off-budget commitments.

"But to eke out the buffers until the election will require meaningful spending cuts now... Desperate times call for desperate measures."

Many Russians will return from the holidays only too aware that life is about to get harder.

Civil servants' salaries will be frozen for the third year, pensions are to rise less than inflation; foreign goods and vacations will become even more expensive.

The blow to living standards is leading some to draw parallels with Russia's previous financial crisis in 1998, when the government defaulted and the rouble lost three-quarters of its value.

"It feels like the 1998 crisis all over again. My salary's value in dollars has more than halved, I now earn less than I did in 1997," said Yelena, a Moscow-based newspaper journalist who asked that her surname not be used.

Investors who fled Russia after the rouble collapse have gradually been returning, encouraged by double-digit bond returns last year, a slight thaw in ties with the West and signs the economy was over the worst.

Expectations interest rates would fall further after 600 bps in cuts over 2015 allowed the government to predict economic growth of 0.7 percent and 1.9 percent this year and the next.

Those forecasts will be in danger if oil does not recover, admits David Hauner, head of CEEMEA debt and strategy at Bank of America Merrill Lynch who has been bullish on Russian bonds.

"As long as oil keeps falling, Russia will keep falling," Hauner said. "We do need to acknowledge that if the market gets disorderly, everything could change quickly and the ice is getting somewhat thin now."

Hauner remains positive on Russian bonds however, noting BAML expects crude to bounce to $50 per barrel later in 2016.

But oil markets are bracing for bigger falls, partly on fears China's economy is in worse shape than it appears.

Investors have started acquiring "put" options that give them the right to sell Brent futures at $25, reflecting expectations of falls below that price. And Russia's Urals crude blend usually trades $2-$3 below Brent.

UBS strategist Manik Narain is one of many analysts reviewing his Russia forecasts - late last year he estimated the rouble would average 75 per dollar in 2016.

The lower oil goes, the harder it is to predict outcomes for the rouble and the economy, he said.

"The big risk is of non-linear currency moves because oil going from $30 to $20 will provoke a very different rouble response from a $40-$30 move," Narain said, citing a likely panic effect among citizens and businesses.