The booming business of oil tankers

With the world awash in oil and prices half their year-ago levels, there's one market that's benefited: crude tanker ships.

In the first half of 2015, shipping rates for the some of the largest tankers transporting oil to Asia peaked at just above $90,000 a day, as countries like China stockpiled cheap crude. Tankers also became a means of floating storage, as some energy companies and traders stored their supplies in hopes of locking in on higher future prices from a market in contango, where the futures price is higher than the spot price.

But by August, tanker rates, which tend to be very volatile, had plunged about 70 percent, as demand dried up ahead of refinery maintenance season. The industry benchmark, the Baltic Exchange Dirty Tanker Index, is now down more than 25 percent for the year.

Still, analysts insist this sector is poised for its most profitable fourth quarter in years.

"We do think that the tanker market is going to see more upside as we move into Q4 of this year," said Christian Wetherbee, a senior transportation analyst at Citi Research. "We see stronger demand from a heating oil perspective and in terms of overall energy consumption. And we would expect, from a supply perspective, not a lot of incremental deliveries to the existing fleets." 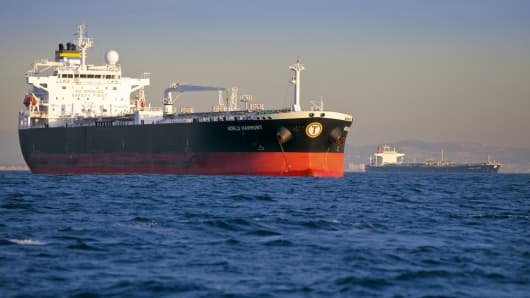 Tim Rue | Bloomberg | Getty Images
Oil tankers are anchored near the Port of Long Beach, California.
Wetherbee pointed out that rates are already rebounding from that August low of about $27,000, creeping back toward $50,000 a day for some very large crude carriers (VLCCs) capable of transporting 2 million barrels in a single voyage.


Much of the demand is coming from Asia, particularly China which, despite its slowing economy, is expected to continue building crude reserves to take advantage of higher refining margins.


"China is a significant driver for tanker demand given its place as an oil importer," said Erik Broekhuizen, head of tanker research and consulting at Poten & Partners, a brokerage and consulting firm specializing in energy and maritime transportation. "As the U.S. has consumed less imported crude due to the shale oil boom now, that crude from West Africa or South America is going to Asia."


Voyages to Asia are longer hauls, and as such a big catalyst for rates. Wetherbee noted a round-trip voyage from West Africa to the U.S. Gulf is roughly 30 days, half that of West Africa to Asia.


These hauls mean ships are in use for longer, a pricing positive for a global fleet that has seen little new supply since the Great Recession. Broekhuizen estimates there are 730 VLCCs operating on the high seas, plus smaller ships and many product carriers that specialize in refined petroleum products such as jet fuel and diesel.


Adds Wetherbee: "We should start to see some of the fleet expansion pick up a bit in 2016, but over the course of the next couple of quarters that probably does not play as much of a role."


There's another positive for the global fleet: Cheaper oil drives up demand, but it also drives down fuel costs. Like other modes of transportation, fuel is a top expense for ship operators, and the current cheap fuel environment has translated into a tailwind for earnings.


"With the significant decline in oil prices, if growth rates stay pretty much the same, the ship owner is much more profitable," said Broekhuizen. "When oil was $100 last summer bunker prices were close to $700 per metric ton. Now it's closer to $250."

This will be next spark for a sell-off in oil
Ship owners don't impose fuel surcharges on their customers either, meaning when energy prices fall, surcharges don't adjust lower and cut into revenue. Instead rates are negotiated on a voyage-by-voyage basis with fuel among several factors folded into the spot price.

An additional factor to keep an eye on is Iran and whether sanctions get lifted. If that happens an estimated 500,000 to 700,000 additional barrels per day of crude could come to market, pressuring oil prices further and boosting demand for crude transport and storage.

"This will be a double bonus," said Broekhuizen. "Some [Iranian] ships will hit the market, but it will be a net positive for tanker market."

All of this could bode well for stocks like Euronav, DHT Holdings and Nordic American Tankers—small cap names but stocks that represent pure plays in the crude tanker market.

"Within this sector, we have two companies with a buy rating," said Wetherbee. " The first is Euronav, which is our top pick. The second is Gener8 Maritime. Both of these companies have great spot exposure to the very largest of the crude carriers that move oil around the world globally."