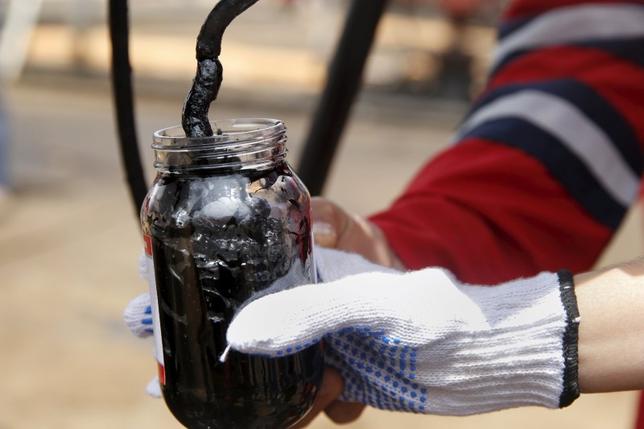 Oilfield workers collect a crude oil sample at an oil well operated by Venezuela's state oil company PDVSA, in the oil rich Orinoco belt, near Morichal at the state of Monagas April 16, 2015.

LONDON The North American oil boom is proving resilient despite low oil prices, producer group OPEC said in its biggest and most detailed report this year, suggesting the global oil glut could persist for another two years.

A draft report of OPEC's long-term strategy, seen by Reuters ahead of the cartel's policy meeting in Vienna next week, forecast crude supply from rival non-OPEC producers would grow at least until 2017.

Sluggish global demand for oil means the call on OPEC's crude will fall from 30 million barrels per day (bpd) in 2014 to 28.2 million in 2017, effectively leaving the group with two options - cut output from current levels of 31 million bpd or be prepared to tolerate depressed oil prices for much longer.
"Since June 2014, oil prices have experienced a significant reduction, reaching levels even lower than the crisis experienced in 2008, yet non-OPEC supply is still showing some growth," the OPEC report said.

Brent crude has collapsed from $115 a barrel in June 2014 due to ample supplies amid a U.S. shale oil boom and a decision by OPEC last November not to cut output.

Instead the group chose to increase supply in a bid to win back market share and slow higher-cost competing producers.

But shale oil production has proved to be more resilient than many had originally thought.

"Generally speaking, for non-OPEC fields already in production, even a severe low price environment will not result in production cuts, since high-cost producers will always seek to cover a part of their operating costs," the OPEC report said.

"For future non-OPEC production, only expectations of an oil price environment in the long-term below the marginal cost of production may deter substantial non-OPEC developments. Over the very long term, the economic threshold at which oil companies invest in upstream projects likely reflects their long-term oil price expectations."

It also said that since 1990, most of the forecasts concerning future non-OPEC oil supply have been pessimistic and often erroneous: "For example, non-OPEC production was once projected to peak in the early 1990s and decline thereafter."

OPEC publishes long-term strategy reports every five years. Its 2010 report did not mention shale oil as a serious competitor, highlighting the dramatic change the oil markets have undergone in the past few years.

The long-term report is prepared by OPEC's research team in Vienna and traditionally cautions that it does not articulate the final position of OPEC or any member country on any proposed conclusions it contains.

OPEC's ability to cut and raise production over the past decades to balance demand has earned it a reputation of being a swing producer. But the long-term report suggested it is tight shale oil that is now playing this role.

"Recent structural changes in the growth patterns of non-OPEC supply as a result of the substantial contributions from North American shale plays might prove to be a turning point (e.g. short lead times of the projects and higher short-term price elasticity)," the report noted.

It said new and cheaper technologies in extraction of tight crude, shale gas, and oil sands would guarantee aggregate growth at 6 percent per year and contribute 45 percent of the growth in energy production to 2035.

"Improved technology, successful exploration and enhanced recovery from existing fields have enabled the world to increase its resource base to levels well above the expectations of the past... The world's liquids resources are sufficient to meet any expected increase in demand over the next few decades," it said.

"With plenty of oil still left in familiar locations, forecasts that the world’s reserves are drying out have given way to predictions that more oil than ever before can be found," the report said.