Oil falls below $63 as dollar strengthens 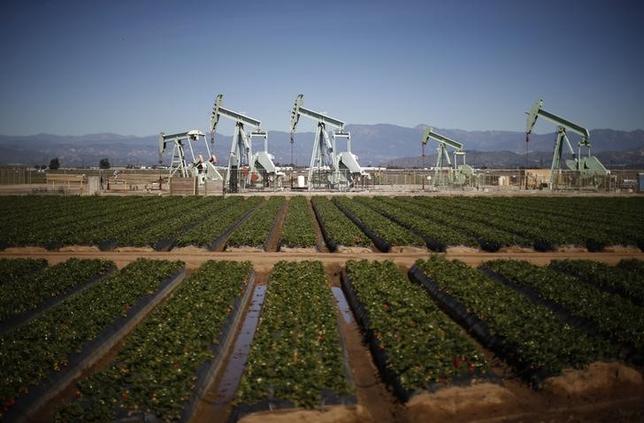 Oil pump jacks are seen next to a strawberry field in Oxnard, California February 24, 2015.
Reuters/Lucy Nicholson

LONDON Crude oil futures reversed early gains to fall below $63 a barrel on Wednesday as the dollar's recovery from early losses outweighed expectations of a draw on U.S. oil stocks.

Oil prices had fallen nearly 3 percent the previous day, pressured by a strong rally in the dollar.

A weaker U.S. dollar makes dollar-backed commodities such as crude oil more attractive for holders of other currencies.
The dollar was up 0.34 percent against a basket of currencies .DXY, recovering from a fall of 0.33 percent.

"We are hostages a little bit to the swings in the currency markets," said Ole Hansen, head of commodity strategy at Saxo Bank.

The American Petroleum Institute will release its data on Wednesday at 2030 GMT, delayed by one day because of the U.S. Memorial Day holiday on Monday. The U.S. government's Energy Information Administration will publish its own data at 1500 GMT on Thursday. [API/S]

"If global demand continues to surprise to the upside and diesel somehow manages to hold value, then crude can surge," Energy Aspects analysts said in a note.

However, investors have started taking profits on Brent as hedge funds and money managers cut their bets on rising prices for a second straight week.

"Further unwinding of these positions would remove a key pillar of support to prices," BMI Research analysts said in a note.

Investors also remained wary of ample supply as top OPEC producers Saudi Arabia and Iraq kept exports near record levels. The Organization of the Petroleum Exporting Countries (OPEC) is expected to keep production steady at its meeting on June 5.

"I am not so bullish on fundamentals," said one bank trader who declined to be identified because of company policy. "Brent could possibly go down to $60 on profit-taking."