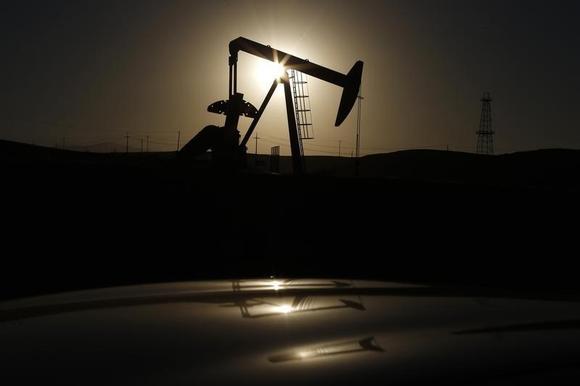 A pump jack is seen at sunrise near Bakersfield, California October 14, 2014.
Credit: Reuters/Lucy Nicholson
http://www.reuters.com/article/2015/02/13/us-markets-oil-idUSKBN0LH08120150213
LONDON (Reuters) - Oil rose above $60 a barrel on Friday for the first time this year, bringing gains this week to almost 4 percent, supported by signs that deeper industry spending cuts may curb excess supply.

Also supporting oil, euro zone economic growth accelerated unexpectedly in the final quarter of 2014 as the bloc's largest member, Germany, expanded at more than twice the expected rate.
The price of Brent crude collapsed from $115 in June to $45.19, the lowest in almost six years, in January due to oversupply. Since January, mounting signs of lower industry spending have helped prices rally by more than 30 percent.
Apache Corp (APA.N), a top U.S. shale oil producer, said on Thursday it would cut capital spending and its rig count in 2015 following the price collapse, keeping its output growth mostly flat.
Brent for April delivery LCOc1 was up $1.90 at $61.18 by 1435 GMT (09:35 a.m. EST), having traded at a high of $61.77 earlier in the session. The March contract expired overnight. U.S. crude CLc1 was up $1.55 at $52.76.
"During the last weeks, crude oil rebounded, driven by improved market sentiment and by expectations that low prices will lead to lower supply growth in 2015," Daniela Corsini, an analyst at Intesa Sanpaolo, said in a report.
Besides Apache's update, Royal Dutch Shell's RDSA.L chief executive said on Thursday supply might not be able to keep up with growing demand as companies reduce budgets, and France's Total (TOTF.PA) announced investment and job cuts.
Demand for OPEC's crude oil will grow this year, the world's biggest energy agencies forecast this week, after cartel chose to maintain market share and not reduce output to combat falling oil prices.
The International Energy Agency and the Organization of the Petroleum Exporting Countries have raised by at least 200,000 barrels per day (bpd) their estimates of demand for OPEC crude in 2015. The U.S. government's Energy Information Administration forecasts OPEC will pump 140,000 bpd more.
Still, analysts at JBC Energy in Vienna said in reference to Apache's moves that spending cuts can easily be reversed.
"While the company expects North American onshore production to be flat this year, they emphasize their flexibility to come back very quickly if the price environment or the cost structure changes sufficiently," JBC said.
"This is generally what makes most people doubt that the latest rally can be sustained."
A weaker U.S. dollar, which makes dollar-denominated commodities cheaper for holders of other currencies, has also supported oil this week, analysts say.