http://finance.yahoo.com/news/company-bringing-natural-gas-truckers-134640527.html
The domestic abundance and competitive pricing of natural gas is pushing the industrial transport industry to consider it as a more cost effective fuel source. In early March BNSF, the railroad wholly owned by Berkshire Hathaway (BRK-B) announced it will test using liquefied natural gas [LNG] to run its trains. Matthew Rose, CEO of BNSF referred to LNG “a potential transformational change for our railroad and for our industry."
The trucking industry would be just as financially motivated as rails to find an alternative to expensive diesel fuel prices. 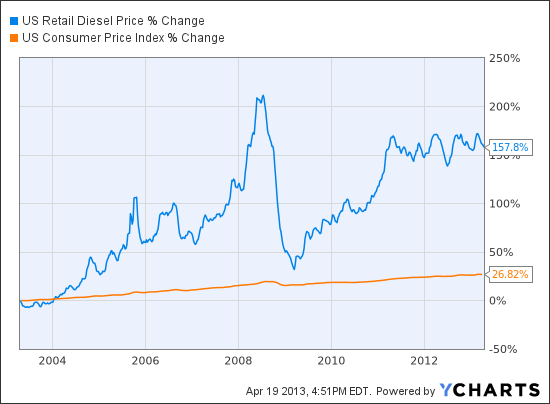 One of the big barriers to trucks using LNG is re-fueling; if you’ve spent any time on major interstates that are the lifeblood of the trucking industry it’s not exactly easy to find a filling station pumping LNG. And until infrastructure is in place it’s a harder sell to get trucks to invest in modifying their engines to take LNG.
But the infrastructure piece is gaining momentum. In early April Royal Dutch Shell (RDS-B) announced it is going to build out more LNG-friendly facilities in the U.S. and Canada. A more direct pure-play is Clean Energy Fuels (CLNE) a $1.1 billion market cap California company dedicated to building out LNG fueling stations for the trucking industry. Clean Energy Fuels also traffics in compressed natural gas facilities; that’s typically the form used for cars and buses.
The company currently has 348 LNG and CNG locations in the U.S. At the end of 2012 it had completed 70 of a planned 150 LNG facilities that will allow heavy-haul truckers to traverse the major I-40, I-10 and I-95 corridors without fear of running out of juice. The company also recently signed a partnership with GE Oil & Gas to make sure those locations will have a ready supply of LNG.
Fund manager Ron Muhlnekamp owns the stock. In a recent shareholder note he explained that while he owns natural gas drillers and suppliers, it’s the transportation angle that he thinks is the next wave in the natural gas investment theme, with trucking getting a special shout out.
To be clear, Clean Energy Fuels is an aggressive small cap gambit that has yet yet to turn a profit. In 2012 revenues rose 14% and delivery of natural gas climbed 25%. 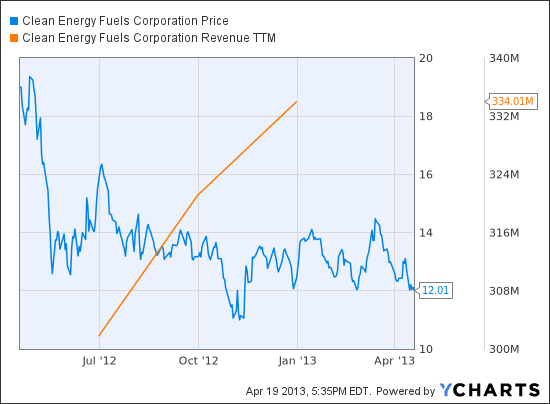 A near-term concern is Chesapeake Energy’s (CHK) planned reduction of its 7.7% stake in Clean Energy to about 1%. That’s not a vote of no confidence, but rather a function of Chesapeake Energy’s need to raise cash.
Carla Fried, a senior contributing editor at ycharts.com, has covered investing for more than 25 years. Her work appears in The New York Times, Bloomberg.com and Money Magazine. She can be reached at editor@ycharts.com.
Posted by Crude Oil Daily at 1:26 PM