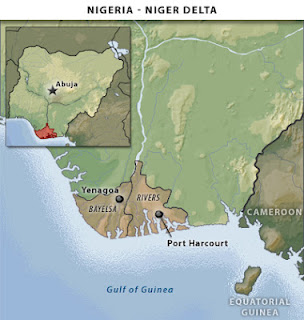 By Owolabi Tife and Austin Ekeinde

NIGER DELTA (Reuters) - At least 92 people including women and children were killed on Thursday after a gasoline tanker crashed on the east-west road in Nigeria's oil-producing Niger Delta and caught fire as people tried to scoop up fuel, a Reuters witness said.

"Early this morning a tanker loaded with petrol fell in Okogbe and people trooped to the scene obviously to scoop the spilled fuel and suddenly there was fire resulting in casualties," Rivers State police spokesman Ben Ugwuegbulam said.
Ugwuegbulam said it was too early to give a casualty figure but a Reuters witness at the scene counted 92 dead bodies of men, women and children.


Hundreds of people crowded around as soldiers and emergency workers lifted bodies into ambulances and police trucks. The fuel tanker was a pile of smouldering ash, twisted metal and melting tyres.


Crashes are common on Nigeria's pot-holed and poorly maintained roads, and in a region where most people live on less than $2 a day the chance to collect spilling petrol is too much of a temptation, despite the high risk of fires.


The east-west road, which runs across the oil-producing region, has been scheduled for development for almost a decade and money is allocated for it in the budget each year.


Nigeria, Africa's biggest oil producer, is plagued by corruption and inefficiency. Most years only about half budgeted programmes are implemented.
Posted by Crude Oil Daily at 10:21 AM