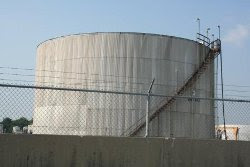 DCP Searsport's proposed liquefied propane gas (LPG) terminal and bulk storage tank in Searsport, Maine was the centre of much debate at a Rockford councillor meeting on 9 July.

Back in March councillors were considering sending a letter of concern to the Searsport Planning Board about DCP's proposed terminal. However, councillors seemed to do a U-turn at their most recent meeting, now supporting an increased use of propane to supply rural Maine.

The LPG tank would reach 138 feet high, something that many residents say would damage the region's tourism industry. However, just one-third the size of FMC's nearby existing facility, and with a 300-foot tall silo already constructed under Dragon Products, councillor Larry Pritchett ensures the tank will not affect tourism.

But this is not the only concern that some have about the proposed terminal. They also fear it would bring increased volumes of traffic to their roads, as well as a high risk of incidents.

Rockland fire chief Charles Jordan Jr., however, believes an incident is unlikely, having not witnessed one at such a facility for 30 years. He says if such a problem were to occur, his personnel are trained in HAZMAT responses.
Posted by Crude Oil Daily at 10:03 AM