Cushing may gain 8 million barrels of storage in 2012 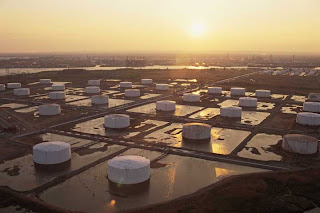 The capacity to stockpile oil in tanks increased 11 to 14 million barrels last year after rising by no more than 5 million barrels a year between 2005 and 2010, the Paris-based agency said in a monthly report today.

‘Storage capacity expansion may continue at an accelerated pace until such time as pipeline capacity to evacuate crude to coastal refining centres catches up,’ the IEA said.

West Texas Intermediate crude on the New York Mercentile Exchange has traded at a discount of as much as $28 a barrel to London-traded Brent over the past year as the volume of inventories at Cushing rose.

‘Thanks to technologies such as hydraulic fracturing, output of light, tight oil from locations such as North Dakota and Texas has surged, while output from the Alberta oil sands also continues to ramp up,’ the IEA said. ‘Amid bottlenecks in the ability to ship crude onward to refining centers on the US Gulf and East coasts, storage build has become more of a necessity than an option.’

The storing of crude was encouraged by so-called contango, where oil for delivery several months in the future sells at a higher price than oil for delivery at the end of the month, the IEA said.
Posted by Crude Oil Daily at 6:30 PM