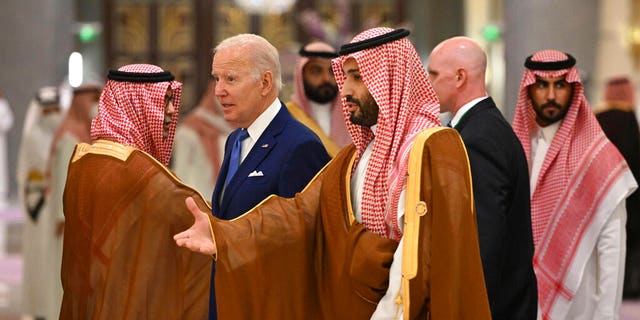 The Saudi Arabian minister of state fired back against claims the country is responsible for higher U.S. gas prices, asserting lack of American refinery production is to blame.

"With due respect, the reason you have high prices in the United States is because you have a refining shortage that has been in existence for more than 20 years," Adel al-Jubeir told "Special Report," "You haven't built refineries in decades."

The Saudi Arabian government has been taking heat since OPEC+ made the decision to slash oil production by 2 million barrels per day. The country was pushed by the White House to avoid making cuts while U.S. gas prices remain high. The Biden administration, meanwhile, has not expanded domestic oil production as Americans are seeing gas prices rise again.

The minister of state asserted that the country does not politicize oil and the shortage is not related to the fundamentals of crude oil supply and demand.

"Oil is not a weapon," al-Jubeir said. "It's not a fighter plane. It's not a tank. You can't shoot it. You can't do anything with it. We look at oil as a commodity and we look at oil as important to the global economy in which we have a huge stake. The idea that Saudi Arabia would do this to harm the U.S. or to be in any way politically involved is absolutely not correct at all."

While many hoped President Joe Biden’s trip to Saudi Arabia would bring cheaper gasoline to Americans, Adel al-Jubeir explained the trip was about the "bilateral relationship" between the countries in promoting peace, envisioning the future, protecting interests, dealing with instability and promoting economic trade, opportunity and investment.

"I think that the issue of oil and oil production may have been taken out of context by perhaps commentators and analysts," he said.

Adel al-Jubeir ultimately asserted the country is "committed to ensuring stability in the oil markets to the benefit of consumers and producers."

The minister of state also offered his condolences to victims of a past California oil refinery accident.