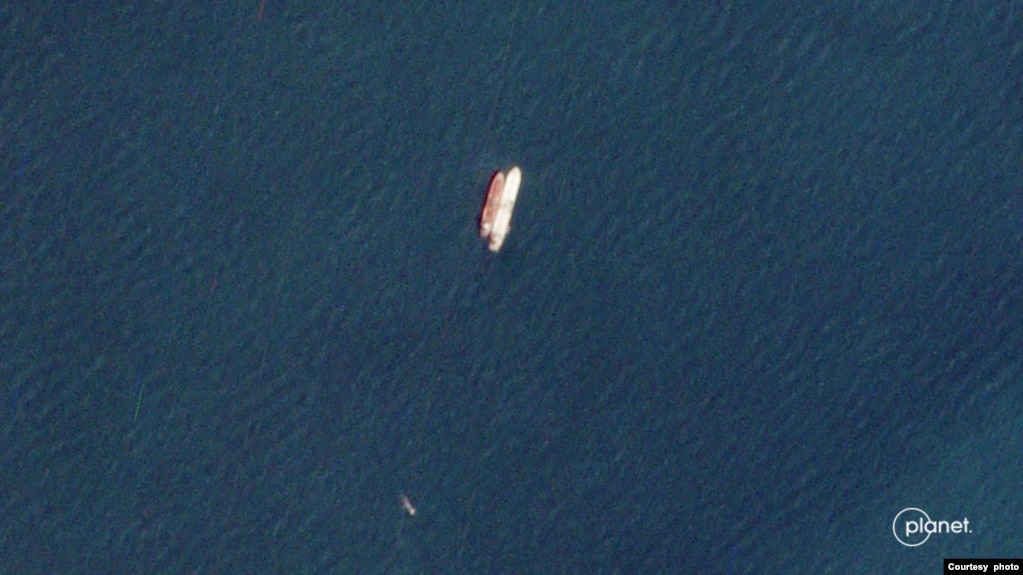 An apparent scheme by Iran and its shipping industry allies to blend U.S.-sanctioned Iranian oil with Iraqi oil in 2020 was short-lived, according to tanker trackers who say Tehran dropped it in favor of a more efficient way to evade sanctions on its oil exports.

TheWall Street Journal reported last month that a UAE-based businessman and several companies he either owns or is connected to via common email and corporate addresses were engaged in blending Iranian and Iraqi oil on tankers through ship-to-ship transfers of crude and refined oil products in the Persian Gulf as recently as 2020.

It said the scheme enabled those involved to disguise the blended oil’s Iranian origin and brand the product as Iraqi in order to avoid U.S. sanctions targeting Iranian oil.

The news report cited one example of the operation in which an Iran-owned tanker named Polaris 1 transferred Iranian fuel oil, a refined product, onto another tanker carrying Iraqi oil in March 2020. The second tanker was named the Babel and was operated at the time by Rhine Shipping DMCC, a company run by UAE-based businessman Salim Ahmed Said, an Iraqi-born British citizen.

The Wall Street Journal attributed its report to corporate documents, shipping data and people familiar with the matter. It also published a statement from Said in which he denied that his companies shipped Iranian oil in violation of U.S. sanctions.

VOA has found additional evidence for the claim that the Polaris 1 and the Babel engaged in the ship-to-ship transfer from March 17-19, 2020, in waters about 30 kilometers from Iraq’s Al-Faw peninsula.

Two vessels resembling the Polaris 1 and the Babel appear side by side in satellite photos that were taken on those dates and provided to VOA by U.S. company Planet Labs.

TankerTrackers.com co-founder Sam Madani, a researcher based in Sweden, told VOA that the physical appearances of the vessels in the photos match the images of the two tankers in his database.

Greece-based maritime analytics provider MarineTraffic also told VOA that data from the Babel’s Automatic identification System (AIS) transponder show that the vessel was at the location seen in the Planet Labs photos on the dates the photos were taken. It said the Polaris 1’s transponder had been switched off from August 2019 until being reactivated on March 20, 2020, when the data showed the vessel was about 380 kilometers southeast of where the reported transfer with the Babel took place in the preceding days.

Tankers often have switched off their AIS transponders in recent years to hide their activities from scrutiny.

Tehran has long refused to comment on how it uses tankers to export its oil to avoid tipping off enforcers of U.S. sanctions and researchers advocating stronger enforcement of those sanctions.

Madani and tanker tracker Claire Jungman, chief of staff at U.S. advocacy group United Against Nuclear Iran (UANI), told VOA they have seen no signs of regular ship-to-ship transfers involving the blending of Iranian and Iraqi oil in the Persian Gulf since 2020. Both researchers said they believe Iran focused on other tactics because the blending scheme was too cumbersome for its relatively small financial reward.

“These shipments involved a refined oil product and were very small,” Madani said in reference to the 2020 blending operations. The Wall Street Journal said the amount of Iranian fuel oil involved in the March 2020 Polaris 1-Babel transfer was worth $9 million.

UANI said last month it estimated Iran’s revenue from crude oil and gas condensates was $37.7 billion from March 2021 to May 2022.

The 2020 oil blending operations also had started to attract public attention by the end of that year, apparently prompting some of those involved to back out of the scheme.

One sign of that scrutiny was an October 23, 2020, Wall Street Journal news report citing unnamed U.S. officials as saying Iranian tankers were regularly transferring crude oil to other ships just kilometers from Iraq’s Al-Faw port as part of an oil blending operation. The report did not name any of the tankers.

UANI later named one of the tankers in a December 2020 blog post. It said a tanker that UANI had been tracking for two years in the Persian Gulf, then-named the Najaf, was acting as a “giant stationary ‘mixer,’ blending different oils in order to obscure Iranian origin, while other tankers collected the new illegal blend for onward export.”

AISSOT was formed in 2017 as a wholly owned subsidiary of Arab Maritime Petroleum Transport Company (AMPTC), which is controlled by the governments of nine members of the Organization of Arab Petroleum Exporting Countries. AMPTC’s website says AISSOT was set up to help the Iraqi government export its oil.

On September 13, 2020, AISSOT published a statement asserting that neither it “nor its affiliated companies, vessels or personnel are involved in any sanctioned trade, including trading Iranian oil."

But on November 25, 2020, the Iraqi government’s State Oil Marketing Organization, said it had stopped using the Najaf as a floating tanker for storing Iraqi fuel oil on October 31 of that year. It said anyone purchasing oil from the Najaf after that date could face “legal consequences arising from trading in a smuggled oil product.”

AISSOT itself ceased to be listed as a ship manager of the Najaf on December 30, 2020, according to Jungman.

In an August 1 statement issued in response to The Wall Street Journal’s most recent report, AMPTC said it had “no knowledge” of smuggling of Iranian oil by AISSOT.

In another statement issued on the same day, AISSOT noted that Iraq remains a member and shareholder of AMPTC.

“There was too much talk about [the blending scheme] and a lot of oversight going on at the time,” Madani of TankerTrackers.com said. “Also, I don’t think it was yielding the kind of result that the Iranians were hoping for. So they just changed things up and experimented with new configurations of vessel movements and oil loadings.”

In the past two years, that experimentation led to Iran setting up shell companies to significantly expand its tanker fleet under foreign flags to obscure Iranian ownership and avoid U.S. sanctions targeting vessels of the National Iranian Tanker Company, according to Jungman and Madani.

Iran also has equipped its enlarged tanker fleet with AIS-spoofing devices that can transmit false data about a vessel’s location to make it harder to track. Spoofing for sanctions evasion now is used to export a majority of Iran’s oil, the researchers said.

Jungman and Madani said Iran has more than 200 oil tankers under its control. The most active of them are 20 to 30 very large crude carriers with a capacity of 2 million barrels that move Iranian oil every other month, Jungman added.

But Madani shared an August 10 European Space Agency (ESA) satellite photo of the Iraqi offshore terminal showing what he said was another tanker named Ephesos berthed at the same spot as the Molecule’s AIS-indicated location, with no sign of the latter vessel.

Instead, another ESA satellite photo that Madani shared from the same date showed what he said was the Molecule loading fuel oil at the Iranian port of Bandar e-Mahshahr, about 100 kilometers to the northeast.

With AIS spoofing and forged bills of lading, shippers who load oil at Iranian ports can claim that it came directly from ports in Iraq or Oman, Jungman said. Unlike blending Iranian and Iraqi oil through ship-to-ship transfers, AIS spoofing means Iran can ship its oil without having to deal with Iraqi customs or owners and operators of tankers carrying Iraqi oil, she added.

“The Iranians basically are cutting all of those people out, and, I assume, cutting the costs of involving Iraq, so they can accumulate the revenue themselves,” Jungman said.

A June report by UANI urged the international maritime industry to tighten regulations against tankers and shipping companies engaged in deceptive behaviors like spoofing. Iran has vowed to keep exporting oil however it can and its top customer, China, has kept importing in defiance of U.S. sanctions, which lack U.N. Security Council approval.

Since June, the Biden administration has imposed three rounds of sanctions against companies that it accuses of helping Tehran to deliver and sell sanctioned Iranian oil. The latest sanctions were announced August 1.

Jungman welcomed the actions but said targeting the owners and operators of vessels is not enough.

“They have a way around the sanctions. They can create a new company and just continue the activity,” Jungman said. “Targeting additional tankers that move Iranian oil would be a better way to crack down, by making it much harder for ports to allow those vessels to dock and offload the oil,” she added.

Asked by VOA whether the Biden administration plans to sanction more oil tankers under Iran’s control, the State Department cited the August 1 sanctions announcement that did not specifically address the issue and directed further questions to the Treasury Department. There was no immediate response from the Treasury Department to the same VOA question.

Jungman also said that oil blending is a tool that Iran could use at its disposal at any moment. “Therefore, it’s important that violators for this sanctionable activity, whether it be past, present or future, are held accountable,” she said.

Lynn Davis contributed to this report.