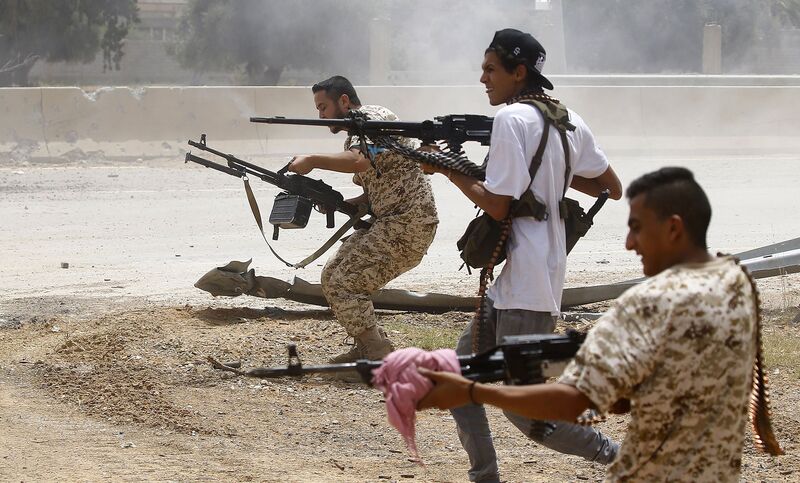 Fighters loyal to the Government of National Accord open fire in the al-Sawani area, south of Tripoli, in 2019. Photographer: Mahmud Turkia/AFP via Getty Images

Tankers have begun to leave Libyan ports without cargoes after waiting for days for the end of a blockade of the country’s export terminals by forces loyal to Libyan commander Khalifa Haftar.

The blockade has virtually halted crude exports from the North African country, which had been running at about 1 million barrels a days in recent months. More than half of those shipments went to buyers in the Mediterranean, with Italy, Spain and France among the biggest buyers. China has also emerged as a significant market for Libyan crude, with about a fifth of export volumes heading to the world’s biggest oil importer.

Haftar’s forces closed export ports in the Gulf of Sirte in Central Libya and the Hariga terminal in the east of country on Jan. 17. The Mellitah and Zawiya terminals in the west of the country were forced to halt shipments two days later, after flows from the fields that supply them were also stopped. As a result of the port closures, the National Oil Corp. declared force majeure on supplies, which can allow Libya -- home to Africa’s largest-proven oil reserves -- to legally suspend delivery contracts.

At least four tankers, capable of hauling more than three million barrels of crude, have left Libyan ports in the last 24 hours without taking on cargoes, according to tanker tracking data monitored by Bloomberg. More are preparing to leave, according to port agent reports.

The country has almost no storage capacity that could allow onshore fields to continue pumping even though exports are curtailed. Several storage tanks at the Ras Lanuf terminal were destroyed in 2018, reducing the number of operational tanks to three from 13. Only Libya’s two offshore projects -- Bouri and Al Jurf -- are still able to operate normally; they typically each pump about 30,000 barrels a day.

Libyan oil production had fallen to 271,204 barrels a day, the NOC said yesterday in a statement on its Facebook page. The company’s Chairman Mustafa Sanalla told Bloomberg Television on Monday that output could fall as low as 72,000 barrels within days if the situation doesn’t improve.

”It is not exactly clear what Haftar seeks in return for an end to the blockade,” Tim Eaton, senior research fellow at the Chatham House think tank in London, said by email. “There don’t appear to be advanced negotiations in place to bring this to an end,” he added, “The indications are that this blockade has some distance to run.” The departing tankers suggest that buyers are no more optimistic that the blockade will be lifted any time soon.