The Biggest Saudi Oil Field Is Fading Faster Than Anyone Guessed 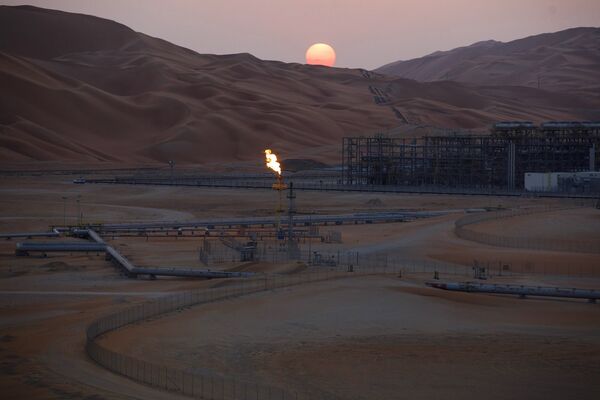 It was a state secret and the source of a kingdom’s riches. It was so important that U.S. military planners once debated how to seize it by force. For oil traders, it was a source of endless speculation.

When Saudi Aramco on Monday published its first ever profit figures since its nationalization nearly 40 years ago, it also lifted the veil of secrecy around its mega oil fields. The company’s bond prospectus revealed that Ghawar is able to pump a maximum of 3.8 million barrels a day -- well below the more than 5 million that had become conventional wisdom in the market.

“As Saudi’s largest field, a surprisingly low production capacity figure from Ghawar is the stand-out of the report,” said Virendra Chauhan, head of upstream at consultant Energy Aspects Ltd. in Singapore.

The Energy Information Administration, a U.S. government body that provides statistical information and often is used as a benchmark by the oil market, listed Ghawar’s production capacity at 5.8 million barrels a day in 2017. Aramco, in a presentation in Washington in 2004 when it tried to debunk the “peak oil” supply theories of the late U.S. oil banker Matt Simmons, also said the field was pumping more than 5 million barrels a day, and had been doing so since at least the previous decade.

In his book “Twilight in the Desert,” Simmons argued that Saudi Arabia would struggle to boost production due to the imminent depletion of Ghawar, among other factors. “Field-by-field production reports disappeared behind a wall of secrecy over two decades ago,” he wrote in his book in reference to Aramco’s nationalization.

The new details about Ghawar prove one of Simmons’s points but he missed other changes in technology that allowed Saudi Arabia -- and, more importantly, U.S. shale producers -- to boost output significantly, with global oil production yet to peak.

The prospectus offered no information about why Ghawar can produce today a quarter less than 15 years ago -- a significant reduction for any oil field. The report also didn’t say whether capacity would continue to decline at a similar rate in the future.

In response to a request for comment, Aramco referred back to the bond prospectus without elaborating.

The new maximum production rate for Ghawar means that the Permian in the U.S., which pumped 4.1 million barrels a day last month according to government data, is already the largest oil production basin. The comparison isn’t exact -- the Saudi field is a conventional reservoir, while the Permian is an unconventional shale formation -- yet it shows the shifting balance of power in the market.

Ghawar, which is about 174 miles long -- or about the distance from New York to Baltimore -- is so important for Saudi Arabia because the field has “accounted for more than half of the total cumulative crude oil production in the kingdom,” according to the bond prospectus. The country has been pumping since the discovery of the Dammam No. 7 well in 1938.

On top of Ghawar, which was found in 1948 by an American geologist, Saudi Arabia relies heavily on two other mega-fields: Khurais, which was discovered in 1957, and can pump 1.45 million barrels a day, and Safaniyah, found in 1951 and still today the world’s largest offshore oil field with capacity of 1.3 million barrels a day. In total, Aramco operates 101 oil fields.

The 470-page bond prospectus confirms that Saudi Aramco is able to pump a maximum of 12 million barrels a day -- as Riyadh has said for several years. The kingdom has access to another 500,000 barrels a day of output capacity in the so-called neutral zone shared with Kuwait. That area isn’t producing anything now due a political dispute with its neighbor.

While the prospectus confirmed the overall maximum production capacity, the split among fields is different to what the market had assumed. As a policy, Saudi Arabia keeps about 1 million to 2 million barrels a day of its capacity in reserve, using it only during wars, disruptions elsewhere or unusually strong demand. Saudi Arabia briefly pumped a record of more than 11 million barrels a day in late 2018.

“The company also uses this spare capacity as an alternative supply option in case of unplanned production outages at any field and to maintain its production levels during routine field maintenance,” Aramco said in its prospectus.

For Aramco, that’s a significant cost, as it has invested billions of dollars into facilities that aren’t regularly used. However, the company said the ability to tap its spare capacity also allows it to profit handsomely at times of market tightness, providing an extra $35.5 billion in revenue from 2013 to 2018. Last year, Saudi Energy Minister Khalid Al-Falih said maintaining this supply buffer costs about $2 billion a year.

Aramco also disclosed reserves at its top-five fields, revealing that some of them have shorter lifespans than previously thought. Ghawar, for example, has 48.2 billion barrels of oil left, which would last another 34 years at the maximum rate of production. Nonetheless, companies are often able to boost the reserves over time by deploying new techniques or technology.

In total, the kingdom has 226 billion barrels of reserves, enough for another 52 years of production at the maximum capacity of 12 million barrels a day.

The Saudis also told the world that their fields are aging better than expected, with “low depletion rates of 1 percent to 2 percent per year,” slower than the 5 percent decline some analysts suspected.

Yet, it also said that some of its reserves -- about a fifth of the total -- had been drilled so systematically over nearly a century that more than 40 percent of their oil has been already extracted, a considerable figure for an industry that usually struggles to recover more than half the barrels in place underground.
Posted by Crude Oil Daily at 11:39 AM