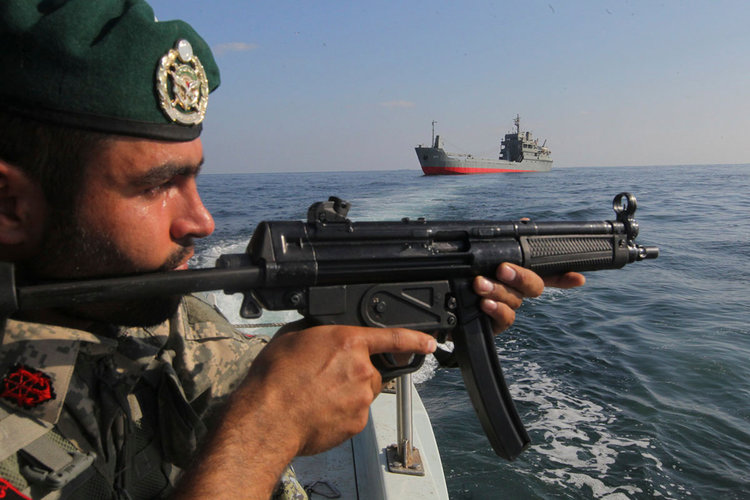 https://www.businessinsider.com/iran-raises-tensions-with-trump-by-practicing-closing-strait-of-hormuz-2018-8
Iran is expected to launch a major military exercise in the Persian Gulf intended to show it can close the Strait of Hormuz, according to CNN, citing two US officials.

"We are aware of the increase in Iranian naval operations within the Arabian Gulf, Strait of Hormuz, and Gulf of Oman," Capt. William Urban, a spokesman for Centcom, said in a press statement. "We are monitoring it closely and will continue to work with our partners to ensure freedom of navigation and free flow of commerce in international waterways."

"We also continue to advocate for all maritime forces to conform to international maritime customs, standards, and laws," Urban added.

The Strait of Hormuz is a sea passage into the Persian Gulf between Iran and Oman, through which about 30% of the world's oil supply passes.
President Donald Trump has lately been in a war of words with the leaders of Iran.

In June, Trump threatened sanctions on countries that purchase oil from Iran, to which Tehran responded by threatening to shut down the Strait of Hormuz.

Trump, Iranian President Hassan Rouhani , and even a powerful Iranian general, Maj. Gen. Qassem Soleimani , have also been bickering back and forth over the past couple of weeks.

CNN reported that US officials viewed the expected Iranian military exercise as alarming for three reasons: It comes as rhetoric between the two nations heats up, it will be a larger exercise than previous ones, and Tehran usually holds such exercises later in the year.

The US thinks the Iranian military exercise will include about 100 naval vessels, most of which are small boats, as well as air and ground forces, CNN reported.

Iran has repeatedly used small fast-attack craft to harass US Navy warships over the past several years.
Nevertheless, these Iranian threats are most likely a bluff.

"In the event Iran choose to militarily close the Strait of Hormuz, the US and our Arabian Gulf allies would be able to open it in a matter of days," retired Adm. James Stavridis previously told CNBC.

And Iran most likely knows this, prompting the question of whether Iran has other intentions.

James Jeffrey, a former US ambassador to Turkey who now serves as an expert at the Washington Institute, previously told Business Insider that Tehran was bluffing about closing the Strait of Hormuz to rattle markets and raise the price of oil.

"They're doing this to spook consumers," Jeffrey said.
Posted by Crude Oil Daily at 11:54 AM