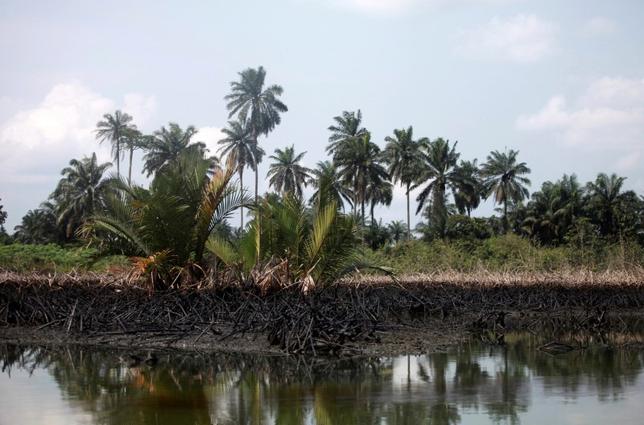 An oil slick clots the bottom of mangroves in Bodo creek in Ogoniland, near Nigeria's oil hub city of Port Harcourt

The attacks are the latest in a Delta region conflict that a major local youth group said is "rapidly deteriorating and getting out of control", putting intense pressure on Nigeria's stretched finances.

The army has moved reinforcements to the swamps in the last few weeks.

Early on Friday, the Niger Delta Avengers group said via its Twitter account it had blown up a pipeline in Nigeria's Bayelsa state owned by Italy's ENI, hours after attacks on another ENI pipeline as well as one belonging to Shell Petroleum Development Company of Nigeria Ltd (SPDC).

"At about 3:30am our (@NDAvengers) strike team blew up the Brass to Tebidaba Crude oil line in Bayelsa," the group said on a Twitter feed it uses to claim attacks.

Shell confirmed its 250,000 barrels a day Forcados pipeline had been hit again and was leaking. "We have ... mobilized appropriate oil spill response measures," SPDC said in a statement.

The pipe had been shut in February after a seawater attack but a new strike might complicate three-month long repairs, for which the firm has brought in experts from abroad. Force majeur has been in place for Forcados crude since then.

The Niger Delta Avengers say oil firms are responsible for pollution and say the poor swampland region fails to reap any benefit from its reserves.

It said its attacks had brought Nigeria's oil production to just 800,000 barrels per day (bpd), from 2 million bpd, without killing anyone, though they hit infrastructure feeding crude grades already under force majeure.

The ENI pipeline is used to transport Brass River crude.

The group also hit ENI's Ogboinbiri-Tebidaba and Clough Creek-Tebidaba pipelines in Bayelsa and warned ENI not to start repairs or "we will make you regrets it".

ENI did not respond to a request for comment.

Ayiri Appah, a resident of Ogboinbiri, where the ENI pipelines are located, said he "heard a loud sound" from the area between 2 and 4 am local time.

Nigeria's oil minister said on Thursday that output was 1.6 million bpd. Even if the most recent attacks, which also included facilities belonging to Chevron under its Escravos grade, took out all exports of the oil linked to them, June production would remain near 1.2 million bpd.

Experts said the violence showed little sign of abating, and would keep pressure on the Nigeria's oil production and finances. President Muhammadu Buhari, a Muslim from the north, on Thursday canceled what would have been his first visit to the Delta region since taking office.

The Avengers have accused Buhari of ignoring local problems by having never visited the Christian region in the south.

The Ijaw Youth Council, which represents one of the largest ethnic groups, called on Buhari to "urgently and personally take charge ... to return peace and normalcy to the region."