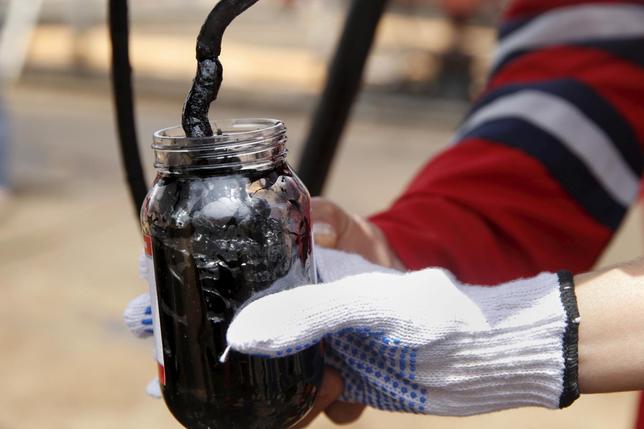 The Saudi-led coalition bombing Yemen said its three-week operation against Iran-allied Houthi rebels was over and it would focus now on security, counterterrorism, aid and a political solution for Yemen.
"The market's gone up quite a bit lately and was due for a correction, so the Saudi announcement was a step in the right direction in the sense that it diffuses some of the tensions in the Middle East," said Joseph Posillico, senior vice president of energy futures at Jefferies in New York.
On the stockpiles side, a Reuters survey showed that U.S. crude inventories likely rose for the 15th straight week, adding nearly 3 million barrels last week. [EIA/S]
The American Petroleum Institute, an industry group, meanwhile, said its own reading showed a stock build of 5.5 million barrels last week. [API/S]
Official stockpiles data will be issued on Wednesday by the government's Energy Information Administration.
U.S. crude's front-month May contract CLK5, which expired at the close of Tuesday's session, finished down $1.12, or 2 percent, at $55.26 a barrel. The nearby June contract LCM5, which will become the front-month beginning on Wednesday, settled down $1.27 at $56.61.
UK North Sea Brent crude LCOc1, the more widely used global benchmark for oil, fell $1.37, or 2.1 percent, to $62.08.
Both U.S. crude and Brent extended losses in post-settlement trade, after the release of the API data.
Despite those declines, Brent remained up nearly 12 percent for April while U.S. crude was about 16 percent higher after gains over the past two weeks on speculation that the selloff in oil that began last summer was losing steam.
Some analysts disagree that the market is on the cusp of a longer-term recovery.
Commerzbank's Carsten Fritsch sees Brent heading down to the low $50s a barrel last seen in March.
The head of the world's largest oil trading company, Vitol, said oil prices were likely to slip as refineries undergo maintenance work in the second quarter.
"We will probably see another dip in oil prices in Q2", but not below January lows, Ian Taylor told Reuters on the sidelines of an industry conference in Lausanne, Switzerland.