BoG's measures to save the cedi won’t work - Andrew Awuni 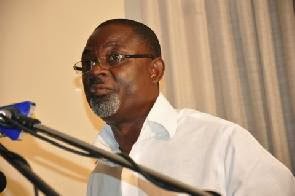 Andrew Awuni﻿
http://www.ghanaweb.com/GhanaHomePage/NewsArchive/artikel.php?ID=300284
A civil society organization, the Centre for Freedom and Accuracy says the measures recently announced to address the free fall of the cedi by the Bank of Ghana, will not work.

According to the Centre, the measures are mundane and administrative. Addressing a news conference in Accra Monday, Executive Director of the Centre Andrew Awuni stated that “the Ghanaian Economy is in a serious crisis”.

“The crisis that has hit the economy can be traced to two main fault lines; 1) The faulty Economic Fundamentals and some Self-Serving Government Policies and 2) The reckless and self destructive over- expenditure of over USD4billion in the last three months of 2012.”

Mr Awuni is also worried that “no one has taken responsibility for this horrendous and debilitating action and no one has been punished or shamed for putting the nation through it all”.

“My dear friends the bottom line of this whole Cedis depreciation saga is that of demand and supply and therefore any effort to address the problem that does not take into account the question of how to increase supply, or reduce demand will be a sheer waste of time.”

Below is the full statement:

ADDRESS BY MR. ANDREW AWUNI-EXECUTIVE DIRECTOR OF THE CENTRE FOR FREEDOM AND ACCURACY ON THE DEPRECIATION OF THE GHANA CEDI AND RELATED MATTERS.

Good Morning Ladies and Gentlemen and thank you for honoring our invitation to today's press conference. This morning we wish to remind you all and for that matter all Ghanaians, of one of the primary functions of the Centre for Freedom and Accuracy (CFA) which is to be advocates for free enterprise. ,

Because of the Anti-Corruption Campaign which we started last year, there are many who think that the Centre is only an Anti-Graft institution; not necessarily; we are more than that. We are free spirits, working for free enterprise.

Ladies and Gentlemen the NATION HAS A CRISIS ON ITS HANDS. We have come to comment on the crisis and to state our position on the solutions that have been proffered so far. Many people do not know this but the Ghanaian Economy is in A SERIOUS CRISIS. We are not just running short on US dollars but what this also means is that we do not have enough reserves to defend the Ghana Cedi. Not just that, but we have also been running short on revenue and funding for our National Budgets has been falling short by more than 30 per cent annually since 2010.

Ladies and Gentlemen we are in A SERIOUS FINANCIAL CRISIS but the irony is that it is happening at a time that the country's major exports (cocoa and gold) enjoyed some of the highest international market prices in more than three decades until recently.

We are having this SERIOUS FINANCIAL CRISIS at a time when for the first time in our history Ghana has become an oil exporting country. In fact, our oil export revenue in 2013 alone stood at USD2.9billion making us a net exporter of oil by about USD300million.

In the midst of this SERIOUS FINANCIAL CRISIS, we are also inundated with announcements from the Ghana Investment Promotion Centre (GIPC) that Ghana is the third largest recipient of Foreign Direct Investment in Africa after South Africa and Nigeria.

Is it not really an irony that our Cedi should be on a free fall in spite of all these inflows of foreign capital into the economy? That is why the recent announcement by the Bank of Ghana of the injection of some USD20miliion in the economy to stabilize the Cedi, is laughable.

Ladies and Gentlemen, THE CRISIS THAT HAS HIT THE ECONOMY can be traced to two main fault lines;

1) The faulty Economic Fundamentals and some Self-Serving Government Policies and 2) The reckless and self destructive over- expenditure of over USD4billion in the last three months of 2012.

Unfortunately, even though the nation agrees that this over expenditure actually took place and that it has exposed the country to untold economic hardship, no one has taken responsibility for this horrendous and debilitating action and no one has been punished or shamed for putting the nation through it all.

And so the year 2014 opened with the US dollar going for GHc2.20. In less than two months, the US dollar is now selling for GHc2.87 and even so the dollars are nowhere to be found. My dear friends the bottom line of this whole Cedis depreciation saga is that of DEMAND AND SUPPLY and therefore any effort to address the problem that does not take into account the question of how to increase SUPPLY, or reduce DEMAND will be a sheer waste of time.

The supply or volume of foreign currency in an economy is the function of Financial and Economic Policy Management and not just Monetary Policy. When Government fails to initiate policies that improve on productivity and increase economic activity, people resort to imports to make up for the short supply of their needs and this puts pressure on the dollar as demand for the dollar to pay for imports increases and hence increasing the value of the dollar against the local currency.

While we agree that the Central Bank can come in with short term measures to arrest any instability we at the Centre for Freedom and Accuracy say that the BOG cannot and should not be held responsible for what is currently going on with the Ghana Cedi. Indeed the attempt to make the BOG a scapegoat for a crisis that is purely the result of the lack of imagination, incompetence and the indiscretions, of the economic and fiscal policy managers is very unfair.

The BOG is the custodian and manager of the treasury, but its role does not extend to the generation of those monies. The BOG is a regulator of the money market and also has the mandate to administer the rules and regulations in that market. That is why the responses they have come out with in the wake of the crisis have all been administrative and somewhat mundane.

These rules and regulations are not new and ought to have been in place long ago. However, trumpeting these rules and regulations with threats to jail people at a time of a foreign exchange crisis will only exacerbate the already precarious situation. The black market has suddenly been reinvigorated. Businesses and individuals are all looking for new ways of keeping their foreign currencies away from the banks. Not because they are criminally minded but because of the uncertainty that the BOG's responses have created.

The CFA wants to repeat that the clever way by which the managers of the national economy have successfully planted the Central Bank in the eye of this crisis and making the BOG the "face of the problem" is most disingenuous and most unfair.

Those who over all the years, have authorized Government's over spending must be held responsible for our CURRENT CRISIS particularly the recent spending overrun in 2012 of over USD4billion.

Those who year after year have been spending over and above the Appropriation Acts by hundreds of millions of Ghana Cedis, are the ones who are directly responsible for THE CRISIS.

Those who took the decision to sideline the Tema Oil Refinery (TOR) and rather go into European markets to spend USD2.6billion annually to import finished petroleum products for Ghana are the ones who must be held directly responsible for THE CRISIS.

Those who supervised and sanctioned Ghana's loan Agreement with China whereby Ghana has been paying commitment fees (in dollars) and at the same time meeting its obligation of selling Ghana's share of Oil to the Chinese for the past three years, for a loan that has not been disbursed, must be held responsible for THE CRISIS.

Ladies and Gentlemen, those who have made picking up loans from the four corners of the world their hobby and have thus succeeded in bloating the country's statutory financial commitments by way of interests' payments must be held responsible for our CURRENT PREDICAMENT.

Immigration Officers, Prison Officers and all the other Para-military organizations without pausing to look for substitutes and save the country such expenditure, are responsible for the FOREIGN EXCHANGE CRISIS.

The Foreign Exchange crisis that the country is going through is a matter of DEMAND and SUPPLY. A true and proper solution will be to increase supply or reduce demand. But the focus should be on the Governmental level and not to go on a blistering attack on the private sector and individuals as we are seeing now. The attack has already shaken the business community and is impacting negatively on investor confidence and that can only exacerbate the problem.

WORKERS ARE BEGAN LOSING LOSSING THEIR JOBS, BUSINESSES ARE FOLDING UP AND RELOCATING, COMPANIES ARE HAVING A HARD TIME PAYING THEIR EXPARTRIATE WORKERS AS OFICIAL SOURCES FOR THE DOLLAR HAVE COMPLETELY DRIED UP. WE ARE DEFINATELY IN A CRISIS.

The solution is not in legislation, controls or commands. What we have on our hand is market problem and only market solutions should apply. Let's not give anybody the impression that we are creating another PYONGYANG here in Ghana with the controls that are being introduced.

Thank you for coming.
Posted by Crude Oil Daily at 3:47 PM