http://news.yahoo.com/mexico-proposes-private-firms-oil-industry-164057449.html
MEXICO CITY (AP) — Mexican President Enrique Pena Nieto proposed on Monday lifting a decades-old ban on private companies investing in the state-run oil industry, a cornerstone of Mexico's national pride that's seen production plummet in recent decades.
The reform would allow profit-sharing contracts with private companies that have exploration know-how in deep water and other difficult areas that the state-owned oil company, Pemex, doesn't have. Such contracts are currently prohibited by the constitution, which would have to be changed.
The leftist Democratic Revolution Party says it won't support constitutional changes, but Pena Nieto's ruling Institutional Revolutionary Party and the conservative National Action Party have enough votes combined to secure the two-thirds majority need in the Senate to pass the change. They could do the same with the support of a small, allied party in the Chamber of Deputies.
The measure then would have to be approved by at least 17 of the country's 32 state legislatures.
"Mexicans will remain the sole beneficiaries of the country's oil profits," Pena Nieto said as he presented his proposal. "It's time to use all of our energy resources to move forward and transform Mexico."
Pena Nieto's administration offered virtually no details about how it envisioned private participation, and Energy Secretary Pedro Joaquin Coldwell refused to specify the maximum percentage of profits that could be shared. The apparent vagueness of the proposal raised uneasiness.
"This has to be carefully studied to see what they mean with this, and what percentage of the profits they would share," said Jesus Zambrano, leader of the leftist Democratic Revolution Party. "This kind of talk is the kind of thing they use when they want to pull the wool over our eyes." 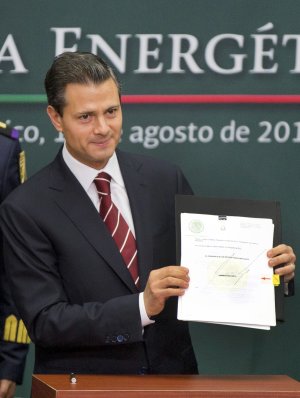 Mexico's President Enrique Pena Nieto shows to the audience his proposal that would allow private fi …
Mexico City-based oil analyst David Shields said the private sector may be underwhelmed by the plan, which like a measure in 2008, appears to make only marginal changes.
"There are no specifics, and with no specifics it is not clear what is going to attract foreign investment," Shields said. "It's as if they opened the door a little bit in 2008 and now they're opening it another little bit, but it's a long way to go before it's open" in the view of private oil companies.
He said the companies want the opportunity to share in the actual oil found and to add oil reserves to their own corporate books. Neither would be permitted under Pena Nieto's proposal.
Pena Nieto emphasized an accompanying measure that would allow private companies to produce and sell electricity for home and business use. He said that would lower consumer prices in a country where people earn far less but pay about 25 percent more for electricity than in many other countries.
Pena Nieto said private companies would be able to bid for profit-sharing contracts to explore and extract oil, and could also apply for permits for refining and transportation.
Mexico's oil fields are drying up and Pemex lacks the equipment to explore for new reserves in deep water or to extract shale gas. Production has plunged about 25 percent over the last decade, and a country that was once a significant oil power could become a net energy importer in a few years unless new production is brought online.
Mexico produces about 2.5 million barrels a day, Pena Nieto said, placing the country among the world's top 10 producers, according to the U.S. Energy Information Administration. He said his proposal would boost Pemex production to 3 million barrels a day by 2018 and 3.5 million by 2025. 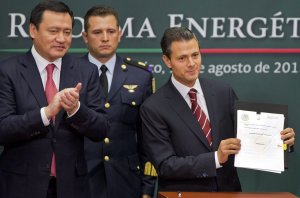 Mexico's President Enrique Pena Nieto, right, shows to the audience his proposal that would allow pr …
Mexico sends 85 percent of its oil exports to the United States and regularly ranks among the top foreign sources of oil used in the U.S.
The energy secretary said that under the proposal private firms could even build private oil pipelines, although in a country where fuel thieves drill into Pemex pipelines thousands of times each year, it's not clear how many companies would want to invest in that market.
Joaquin Coldwell said the pipeline problem is a clear example of the limits of Mexico's current system: Because only Pemex is allowed to build pipelines, they're old and insufficient. "So we have to transport oil in tanker trucks. The only thing is, it costs three times as much," he said.
He said Pemex's bloated work force would suffer no cuts as the company is reorganized into two main divisions — one for exploration and production, the other for refining, petrochemicals and distribution.
Joaquin Coldwell said Mexico hasn't talked about the changes with big oil companies.
Pushing through the proposal without the left's support could come with big political costs: a 2012 poll of 2,400 Mexicans by the Center for Economic Research and Teaching said 65 percent opposed any foreign investment in the oil industry. The poll by the Mexico City-based think tank had a margin of error of two percentage points.
When Pena Nieto's predecessor, Felipe Calderon, tried a similar overhaul in 2008, thousands marched in the streets and Democratic Revolution legislators padlocked the doors of Congress, camping out in the chambers in protest. The watered-down bill that resulted failed to solve Pemex's underlying problems of inefficiency and declining production. 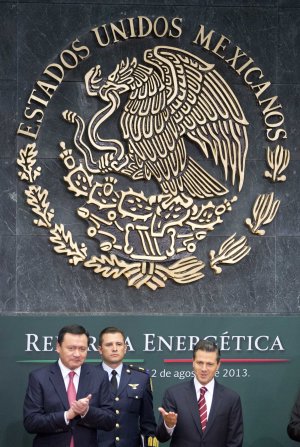 Mexico's President Enrique Pena Nieto, right, greets the audience as his Interior Secretary Miguel A …
The new proposal also threatens to split the Pact for Mexico, the de facto alliance of all three major parties that Pena Nieto is depending on to get major reforms passed.
Pena Nieto's Institutional Revolutionary Party, the PRI, and Zambrano's Democratic Revolution both accused each other of being conservative and blocking Mexico's march toward the future.
"These reforms do the country no good. They are regressive, right-wing, conservative and pro-privatization," said Zambrano.
Manlio Fabio Beltrones, leader of Pena Nieto's party in the Chamber of Deputies, countered: "This is a progressive, cutting-edge reform that seeks to leave behind any conservative attitudes."
The fight centered over Pena Nieto's use of Lazaro Cardenas, the beloved former president who nationalized the oil industry in 1938, to pitch the reform. Cardenas actually allowed some private contracts, but the left called the president's mention of Cardenas "an insult."
At present, Mexican law limits private companies to straight contractual work with incentive bonuses.
Pemex already allows private contractors to do tasks such as operate drills and wells, perform maintenance and provide supplies. But those "integrated contracts" have proven so unappealing to investors that no one bid on half the oil field blocks near Mexico's Gulf Coast that Pemex put up for auction in July.
Posted by Crude Oil Daily at 5:38 PM