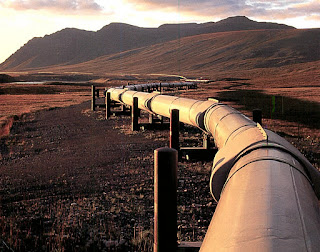 The US state department has formally recommended the rejection of a controversial crude oil pipeline.

The state department denied a permit for the 1,600-mile (2,700km) Keystone XL pipeline, saying it had insufficient time to review the plans.

The Canada-Texas project has been delayed amid objections by the state of Nebraska and environmental groups.

At the end of 2011, Republicans forced a final decision on the plan within 60 days during a legislative standoff.
US President Barack Obama said he was disappointed that the deadline set by Republicans in Congress had caused the state department to reject the project before a full study could be undertaken.

‘This announcement is not a judgment on the merits of the pipeline, but the arbitrary nature of a deadline that prevented the state department from gathering the information necessary to approve the project and protect the American people.’

The crude oil pipeline would run from western Canada to oil refineries on the Texas coast.

Officials said that any new plan that was broadly similar to the rejected proposal could be processed more quickly, but it would take between 12 to 18 months to complete a full review.

Keystone XL has been approved by Canada and is supported by US Republicans who say it would create much-needed jobs and improve prospects for US energy independence.

The oil industry has estimated the project would create 20,000 jobs, although the state department and some independent studies suggest a lower figure of 6,000 jobs.
Environmental groups and the US state of Nebraska expressed concerns that the pipeline could contaminate a major aquifer on its route.

There are also concerns about carbon emissions from oil sands production in Alberta, a western Canadian province.

The pipeline would also pass through the US states of Montana, South Dakota, Nebraska, Kansas and Oklahoma.

The White House had tried to postpone a final decision on the project until after the 2012 presidential election.

But during a congressional impasse on a payroll tax holiday in December, Republicans forced the Obama administration to agree to make a decision on the pipeline within two months.

The US state department, however, said this would not be enough time to carry out the legally required environmental studies needed to approve the project.
Posted by Crude Oil Daily at 6:28 PM